Sylvia Wenmackers who introduced me to fractals:

My teammate is Professor Sylvia Wenmackers of Pilot1 project -SLAC+KULeuven-(art+science) as she posted earlier in her blog.

She presented an article at our first symposium where the artists and scientists came together for the first time in relation with this project.
Sylvia had no intension to be a part of this project because she is already overloaded with her academic profession and of being a mother.
While she presented her award winning paper ‘Look-at-that’ , I was very much impressed and decided to request her to be my teammate. Luckily, Sylvia agreed.

While I was a bit lost and had conflicts of presenting outside the boundary of my comfort zone like canvas and oil-paints. Thinking about presenting on another media, I was not sure on wood panels, mdf panels or on fabrics, she gave the idea like an angel – “Why not on the fractal panels”?

Fractals? What are those? So, I started to read about them and believe me, I became a fan because they are extremely interesting in terms of science, art and nature.

A glimpse on fractals:

The word fractal comes from the Latin for “broken”(Peterson & Henderson, 1999).

‘A fractal is a rough or fragmented geometric shape that can be subdivided in parts, each of which is (at least approximately) a reduced-size copy of the whole’.
http://www.inminds.co.uk/fractal.html

In short a fractal is a never-ending pattern or process.

The history of fractals is a path from theoretical studies to modern applications of computer graphics. The first definition of the function with a graph of fractal was presented by Karl Weierstrass, a German mathematician in 1872.
Through time and through various scientists, different types of fractal forms are recognized, like Koch snowflake, Julia set, strange attractor, Sierpinski carpet etc.

Fractals and Chaos of mine:

Fractal dimensions have an important role to characterizing chaotic phenomena. Chaos is present within fractals even if you can find order and symmetry, complexity versus simplicity within it.

The negativity around me in society like discrimination against gender and color are always present. We think the world is civilized, but it is not. Such negativity is present in every scale in our world like fractals no matter how big or how small they are.

Chaos, but I live fine is my ultimate declaration against all negativity which Sylvia appreciated.

So, presenting such a complex subject through fractals suited both of our interests in terms of art and science.

For the first time, I saw a direct link of my situation to present it via a 3D form instead of presenting it in 2D paintings. A box which makes the outside and inside separated but yet together as the world outside, which is chaotic, but inside it is possible to live fine.

Sylvia took the challenge to make a 3D version from 2D panels. She designed and prepared the file for the laser cutter and went to FabLab (Fablab site) in Leuven. She cut 6 panels separately and than brought them together as a 3D form which she succeeded in.

The way to paint:

When I got the sample from Sylvia, means our little cute box of 30x30cm,  I tried various methods of painting techniques. I wanted to play with color, means the tones of the colors. 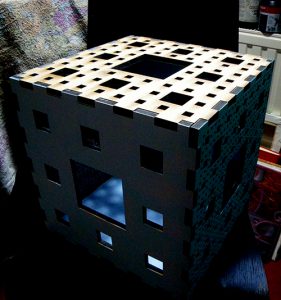 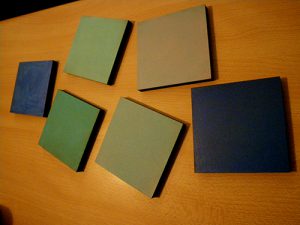 I studied the following painters and the Maxican architect Luis-Barragan :

Thanks to  Wannes Lecompte, for his valuable suggestions and ideas.

We can hardly change the world, so I will keep the outside of the box untouched. I am only going to paint the inner side of the box, which Sylvia agreed to, with each panel with a separate tone of blue resembling to ‘ chaos, but I live fine’. 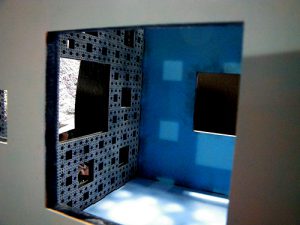 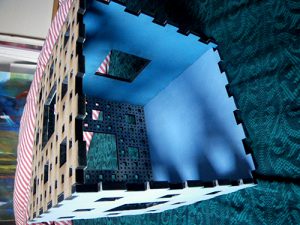